On Wednesday (19 January), HUB24 announced that it had achieved record second-quarter platform net inflows of $3.6 billion, including $349 million transitioned from externally administered legacy IOOF private labels to the wealth giant’s private label, Rhythm Super, which is administered by HUB24.

Total funds under administration (FUA) as at 31 December 2021 were reported to have increased to $68.3 billion, while platform FUA was confirmed to be $50 billion (up 128 per cent on pcp).

Portfolio, administration and reporting services (PARS) was also up to $18.3 billion.

“Our market leadership position and focus on delivering innovative solutions to support the needs of our customers continues to resonate with advisers and their clients.

“This quarter 28 new distribution agreements were signed, including new agreements with self-licensed advisers and practices that are part of advice aggregators.”

The results come after HUB24 announced updates to its acquisition deal with Class, originally announced in October, which includes an increase to the cash consideration payable by HUB24 from $0.10 to $0.125 per Class share.

Class shareholders have been issued with the scheme booklet and are now scheduled to vote on the proposal on 31 January 2022.

Meanwhile, HUB24 said its Xplore integration is “tracking to plan” and is expected to be completed in late 2022. 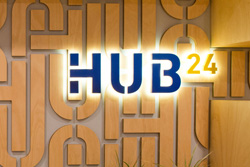