But given the current state of banking in a post-Hayne world, I personally suspect the next two years in financial services will be specifically characterised by rapid change.

Traditional lenders are now facing more than just pressure from the growing wave of alternative and non-bank lenders: they are also now staring down the barrel of a regulator with pie on its face and something to prove, impending regulatory reform, the very real threat of criminal and class actions, and an angry public that is hungry for answers.

‘Business as usual’ is no longer a luxury of our big banks.

But while a number of fintechs have been quick to speak out in the post-Hayne environment about the “amazing opportunity” this represents for them, I also don’t believe it will be as easy as that either.

In fact, I don’t believe we will simply see the rise of the alternative lender, and the fall of the traditional lender.

Pain in both directions

Alternative lending is certainly on the rise: the Australian market reached over US$1 billion in 2018, after increasing 88 per cent on the previous year, according to KPMG.

This makes sense given the speed at which alternative lenders are able to assess creditworthiness and deliver funds at personalised rates, due to their high levels of specialisation and tech-centricity.

We’ve also seen the bold promises of many alternative lenders and their market-altering new technologies transform from rhetoric to reality. Take the case of SocietyOne, who was the first to introduce risk-based pricing in 2012. This actually drove the entire lending market – save just three banks that still appear technologically unable – to update its pricing mechanism in line with this innovative and fairer new model.

However, there is admittedly still some distance to cover. Market capture has not quite been the great big bank heist that was promised – at least not yet.

And when combined with the world of pain that banks are definitely now facing, I predict a new hybrid model is likely to emerge in 2019.

Increasingly, we’re seeing a degree of backtracking on the “us versus them” unbundling approach of fintechs versus banks.

In place of this, a larger number of traditional incumbents and disruptors alike are instead conceding that partnerships and collaboration may be the way forward – in particular through re-bundling and white labelling.

With $2.1 billion of assets under management, US multinational investment bank and financial services company JP Morgan Chase is the US’s largest bank by asset size.

However, this has not made it immune to the challenges of accessing the notoriously challenging small business lending market, which is currently underserviced to the tune of some US$1.7 trillion globally according to business lending tech platform, Trade Ledger.

As a means to combat this, JP Morgan became one of the first banks to form a partnership with a fintech in 2016 when it joined forces with alternative business lender, OnDeck.

From this point on, when SME customers of JP Morgan’s Chase Business Quick Capital take out funds of up to $200,000, they are actually transacting with OnDeck.

The online lending product is white labelled as Chase’s, but is powered and enabled by OnDeck technology. It doesn’t cost the parent company a cent of business, because this is not an area that JP Morgan was previously servicing. Likewise, anyone wanting funds greater than $200,000 will simply be serviced by JP Morgan directly.

In the meantime, the fintech product slashes the JP Morgan small business lending application process to minutes, providing applicants with a decision in just seconds, and delivering funds in as little as 24 hours – three things JP Morgan could not achieve without OnDeck’s sophisticated technology.

Here we see a traditional bank gain entry to a previously underserviced market specifically through a partnership with a fintech.

In fact, when asked of the possibility of future tech partnerships, a JP Morgan representative actually directly stated “We will absolutely think about (technology disruptor) partners and working together instead of always having this narrative of ‘us versus them’.”

Catapulting growth: The case of Tradeplus24 and Credit Suisse

I also foresee these types of partnerships as an increasingly common means for alternative lenders to strategically sling shot their own growth prospects.

As an example, just one year after launching, alternative lending fintech Tradeplus24 significantly scaled its operations practically overnight when it entered into an exclusive partnership with Swiss multinational corporate and investment bank, Credit Suisse.

Recognising the benefits of working with fintechs, Credit Suisse wanted its clients to benefit from access to the alternative lender’s unique asset-backed lending solution. It limited the issuing of its own invoice-based finance product for SMEs, and instead distributed Tradeplus24’s product across its entire business banking franchise. This was also the first time Credit Suisse took equity in a fintech business, demonstrating serious commitment to the partnership.

On Tradeplus24’s side, this opened the door to a huge number of customers practically overnight, as well as access to a potential funder for future operations – to create this type of rapid customer reach on its own in just one year would have involved a minor miracle.

But simultaneously, for Credit Suisse to have developed a solution as sophisticated as that held by Tradeplus24 would have taken significant system changes and an operating overhead that is clearly not possible for any large-scale bank.

Australia next up to the plate

While these examples may have occurred in more mature markets overseas, it’s my prediction that Australia’s reluctance to embrace this trend is set to change.

There are already signs that Australian financial services is capable of, and willing, to learn from our overseas counterparts. Take for example the Open Banking Review chairman Scott Farrell who specifically recommended that Australia seek to follow the UK model where possible. In practice, we’ve also seen our local peer-to-peer market slowly transition to the more efficient marketplace model that UK and US lenders have also transitioned to.

Likewise, I believe we will soon see more examples of this type of “rebundling” and white labelling here on local shores in the same way some of our small super funds have white labelled their products to larger firms like Mercer and BT Financial, and our bigger retail stores have gone to Latitude or Citibank to white label their charge cards.

The result could kill two birds with the one stone: our banks’ problematic reliance on flawed humans and legacy technology, and our fintechs’ need to find the growth they need to survive and thrive.

I encourage incumbents and disruptors alike to consider the possibilities. 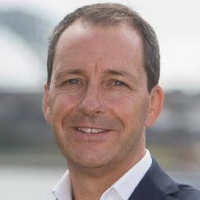