According to Taimur Hyat, the chief operating officer for PGIM, technology is set to reshape the services sector, but the incumbents will prevail.

Mr Hyat explained that while disruptive new entrants are expected to be found in parts of the service sector, “the Goliaths will overpower the Davids”.

“Disruption in services will actually increase the dominance of an elite group of existing technology-forward incumbents – a quite different path than the obsolescence and pain seen in other sectors,” Mr Hyat said.

This, he noted, is for three primary reasons.

“At a minimum, heavy regulation makes it difficult for start-ups to enter key parts of the service sector and truly challenge incumbents,” he noted.

“It turns out, people are more willing to change their online grocery store than their broker, doctor or local hospital,” Mr Hyat pointed out.

Third, existing service sector firms are aware of the high price of complacency.

“This cannibalises their heavy investment in legacy systems but sets them up for future success,” he added.

As such, Mr Hyat concluded that “to a far greater extent than in manufacturing and retail, a select group of existing technology-forward services firms will not just survive but actually thrive during the process of creative destruction ahead of us”. 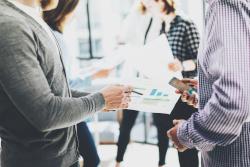