Ahead of the election, Financial Counselling Australia (FCA) has encouraged all parties and candidates to support greater consumer safeguards for buy now, pay later (BNPL).

Around 61 per cent of financial counsellors surveyed by FCA late last year said that most or all of their clients with BNPL debt were struggling to service other living expenses.

The FCA survey also found that the number of financial counsellors who reported that half, more, or all of their clients had BNPL debt had increased from 31 per cent a year ago to 84 per cent.

“Financial counsellors are seeing people with multiple BNPL debts. They are really concerned that so many clients are using the product to cover essentials like food, medications and utility bills,” said FCA CEO Fiona Guthrie.

“We know these products cause harm. BNPL is credit and should be regulated like other credit products.”

The renewed calls from FCA come after the Labor Party committed to introducing stronger regulation for the BNPL sector if it wins the May election.

Shadow Financial Services Minister Stephen Jones told ifa on Thursday that BNPL is a “great innovation” and that the increased competition in the retail credit market is a positive.

But he noted that Labor wants to ensure that the sector is appropriately regulated and not operating outside the flags.

“We welcome the fact that there is an industry code of practice that has been developed,” he said.

“At the moment, it doesn’t apply to everyone, so what we’ve said to industry is that we’ll have a look at how it’s operating, we’ll let it run for a bit and we’ll see where the gaps are.”

Labor also plans to consult with consumer groups to identify any gaps, from the perspective of consumers, before legislating or codifying the code.

“The ALP’s commitment is good news because it is looking to put consumer safeguards in place, however, it will not be enough to simply take the industry’s weak self-regulatory code and put that into regulation,” commented Ms Guthrie.

“Industry self-regulation of the BNPL industry is woefully inadequate. BNPL providers should, at the very least, be required by law to assess whether a person can afford to repay a BNPL debt.”

Last month, FCA and the Consumer Action Law Centre made a submission to a public inquiry by the US Consumer Financial Protection Bureau, warning about the “major flaws” of BNPL self-regulation.

The two groups called on the federal government to conduct a similar review locally, in order to improve BNPL for Australian consumers.

FCA said that individuals in financial stress as well as those who may be struggling with BNPL debt can contact a free and independent financial counsellor via the National Debt Hotline. 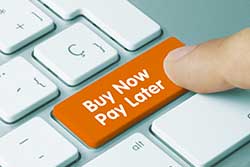