Home/
Wealth/
How Australia’s retail investing bubble could play out

With more consumers staying at home and plugging into the online world as a result of the COVID crisis, Australia’s retail investment market has doubled in size, according to online trading platform Marketech.

“Before the COVID pandemic there were approximately 700,000 retail investors. Today, just 18 months later, there are close to 1.4 million. That is 700,000 new investors in just 18 months,” the group’s chief executive Travis Clark said.

With this explosion in investor numbers has come a similar rise in new trading platform launches, as start-ups in the fintech space look to take advantage of an increased interest in trading among Millennials in particular.

“It is certainly a crowded space, but it is also a very large and growing sector. Robinhood in the US has been the poster child for the rise of low and zero cost trading, and we’ve certainly seen an explosion of platforms in Australia as well,” Mr Clark said.

However Mr Clark warned with a flood of new options coming to market, not all platforms were equal.

“We’ve seen many of these new entrants follow in the Robinhood footsteps by aiming to build scale by competing on price, but at the expense of function. We fundamentally believe this has caused detrimental outcomes for investors,” he said.

“What it has meant is these providers have had to cut corners to make the business viable – that could be by having pooled HINs, pooled savings accounts or delayed market data – each of these is a negative for the end investor.

“Many of the lower cost entrants are designed to hook first time investors, then upsell them to a more viable business, such as fee-paying superannuation or higher margin CFDs.”

Mr Clark said the number of competing platforms in the market was likely to thin out as the current bull market receded, with a large number of retail investors poised to also exit if their chosen platform did not give them enough information to succeed as a day trader.

“Historically, we see a large influx of first time investors during every sustained bull market. When it seems easy to make money in a reflating market, it can pose as a compelling ‘get rich quick’ scheme. But it is one that often quickly sours,” he said.

“We have already seen a large number of the more popular speculative companies drop more than 50 per cent in a short period of time, after an unsustainable rise.

“While it is pleasing to see younger demographics recognise the benefits of investing, often what happens after the initial market euphoria is many of these first time traders leave the market as the conditions become tougher.

“Many of these new investors would have chosen the cheapest way to enter the market, and the cheaper platforms do not provide enough information or tools for trading highly volatile markets – those that do stay ‘in the market’ will need better tools than a ‘buy/sell’ button.”

“The platform was soft launched earlier this year and we currently have a few hundred users that are helping us to improve the product with their feedback. We expect this to grow quickly to around 1,500-2,000 by the end of the year,” he said. 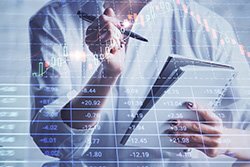